Lizzy Kirkham has won first prize in Access to Understanding 2014. Access to Understanding is a science writing competition for early career researchers, hosted by Europe PubMed Central and The British Library. Entrants were asked to write a summary of one of ten pre-selected articles. The aim of the summary was to explain the research to an educated lay reader in an interesting and informative manner. 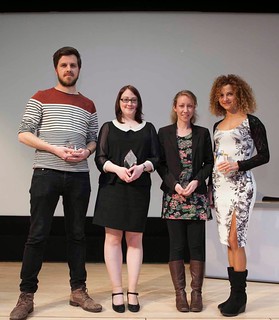 Over 260 people entered from across the globe. On 24th March 2014 Lizzy and the other shortlisted entrants attended a ceremony at The British Library in London. The government’s Chief Scientific Advisor Professor Sir Mark Walport announced the overall winners, with Lizzy’s article winning first prize.

More information about the competition can be found at the Europe PubMed Central blog and at the British Library’s science blog.